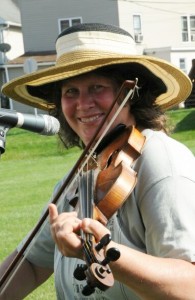 Amy Hopkins is an accomplished work worker and luthier specializing in the repair of fine quality stringed instruments of all kinds. With over 30 years experience in instrument making and repair, she has gained a reputation as one of the finest instrument repair persons in our region.

Amy was born in 1959 in Cockeysville, Maryland. Her interest in wood working began at a very young age. “I was interested in woodworking since I was tall enough to reach my Dad’s basement workbench while standing on a stool.” Her grandfather and uncles were all woodworkers and musicians in the Lake Champlain region.

As a child and young adult, she carved small animals, built birdhouses and made several small plywood instruments with rubber bands for strings. In high school she dumped the boredom of home economics and bulled her way into wood shop class where she began her education in bigger and better wood working tools. After high school, she spent a year at Warren Wilson College where she built her first real instrument, a hammer dulcimer.

Staying true to her love of wood working, Amy worked for a number of years as a house carpenter and timber framer. From 1987 until 2006, she apprenticed and worked with Jeff Hostetter, a wonderful guitar repairman and builder in Shrewsbury PA. A few years later, she bought an old barn in New Freedom and began converting it into a music and repair shop.

For years, Amy and Jeff worked on many vintage and odd instruments. Amy developed a knack for doing fine inlay work. She has done inlay repairs on many fine quality instruments and has built numerous instruments that show her talent and artistry.

Amy feels fortunate to have had the opportunity to work on many vintage and rare instruments, violins, guitars, banjos and mandolins in her career. “Restoration is an important part of lutherie. Restoring old instruments teaches so much about their construction, …including the good, the bad, and the ugly!”

Amy’s understanding of musical instruments and the fine instrument repair process has been influenced by her own musical talents. She has been playing fiddle since she was a small girl. She continues to play with several groups throughout the region.

Amy is also teacher of violin. Having taught for years, she has influenced many young players and has given many the foundation and inspiration to become the talented players they are today.